It’s Friday and time for another edition of  Straaaange cases:

A lawyer who barked like a dog at a witness during a deposition has been fined $8,500 for misconduct and harassment. Apparently, the lawyer started barking like a dog when a witness was asked about some letters at issue in the case, and “behaved in a very mocking manner, making the witness feel intimidated.”

“Mr. Fink was barking up the wrong tree,” one lawyer quipped as he recalled the deposition. “I don’t know what motivated him to bark.” One can only imagine the court reporter’s dilemma. 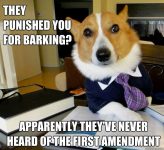