Save the Date Witkin Awards are Live This Year October 14 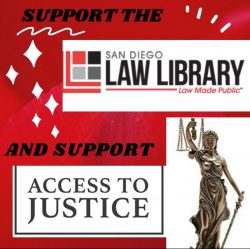 The San Diego Law Library Foundation is pleased to announce the return of the Bernard E. Witkin Award Ceremony as an in-person reception on October 14th, starting 5:30 PM, at Tom Ham’s Lighthouse. There will also be a virtual attendance option. Look for ticketing information coming soon. The Witkin Awards are presented annually to honor members of the San Diego legal community for civic leadership and excellence in education, public service, practice and adjudication of the law.

The namesake of the award, Bernard E. Witkin, had a nearly 70-year legal career that included an impressive range of activities that took place as the law of California was experiencing exponential growth in both size and complexity. Witkin’s impact on California’s law, and on the law of other states, was enormous. He served as Supreme Court clerk and Reporter of Decisions and was a tireless advocate for legal reform. His treatises have been cited by the California Supreme Court and Courts of Appeal more than 20,000 times.