Thank You For a Wonderful Reception for Lawyers Without Rights 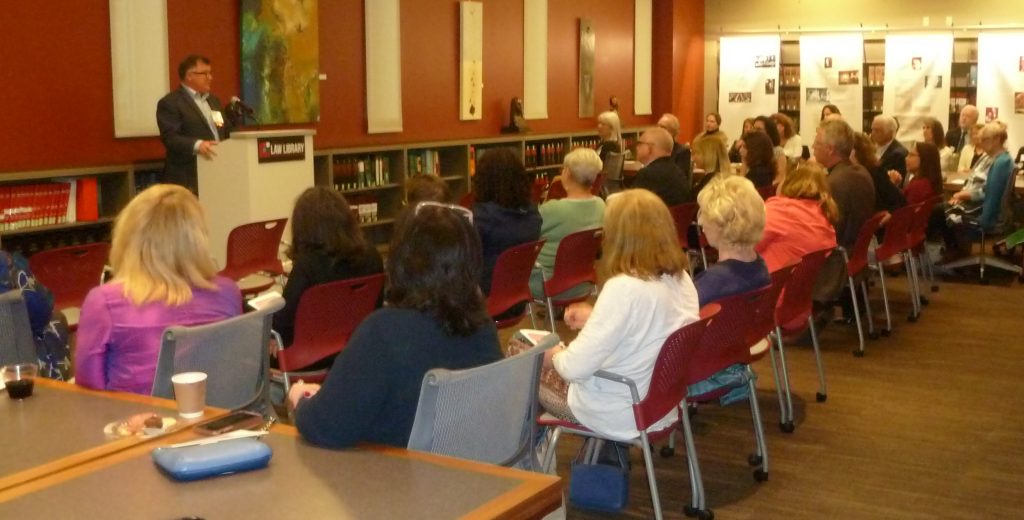 The San Diego Law Library and the Anti-Defamation League of San Diego welcomed a packed audience to the law library to view the exhibit “Lawyers Without Rights: Jewish Lawyers in Germany Under the Third Reich,” and participate in a thought-provoking presentation about the rule of law and its importance in securing an individual’s civil rights.

Attendees enjoyed fruit, cheese, and dessert while experiencing the moving exhibit. SDLL Director John Adkins welcomed the attendees, who were also given a brief history of how the exhibit came to be. Guest speaker, Richard “Rick” Barton gave a moving presentation that began with the story of his family’s escape from Germany in the 1930s. He discussed how the Nazi Party used legislation to incrementally disenfranchise ethnic and social groups deemed undesirable by the Nazi Party. Barton focused on how the rule of law protects all members of society, not just a majority or a single group. Also, he talked about how law must be tempered by morality and a sense of humanity. The presentation ended with an open discussion that included questions about hate speech, social media, education in schools, and recent tragedies, including the shooting at the Chabad of Poway on April 27th.

Thank you to all who attended. The night’s events would not have been possible without:

The “Lawyers Without Rights” exhibit was originally created by a local bar association in Berlin, Germany. It began in 1995, when an attorney visiting Berlin asked the local bar association if they kept records of the Jewish attorneys that were denied the ability to practice law by the Nazi Regime. The Berlin bar association worked with author Simone Ladwig-Winters to identify and profile of over 1,400 of the 1,835 Jewish legal professional practicing in Berlin and document their fates. The Berlin Bar Association published the book, “Lawyers Without Rights: The Fate of Jewish Lawyers in Berlin After 1933.”  While touring the book around Germany, other regional German bar associations identified more Jewish lawyers that were effected, and The American Bar Association and the German Federal Bar created this exhibit using the information. The exhibit will be on display at both the Downtown and North County locations through May 31st, 2019 during regular business hours.

If you are interested in attending more events like this sign up for our newsletter. And, if you have ideas for future programs, please let us know by contacting our Librarian for Partnerships and Communication by email.